William Hogarth  (1697 - 1763) is one of the most important of British Artists. An engraver, and painter, he produced some of the most vivid and dramatic images of 18th Century  life. The three hundredth anniversary of his birth, was marked by several exhibitions and publications.

The Lampeter Founders' Library holds over 150 of  the original engravings. Currently the majority are bound in two  large volumes which require some conservation. Methods for this are under review at the time of writing.

The Prints are from various dates, from first issues to later copies published by enterprising publishers such as Boydell. All the main series, the 'Progresses'  - 'The Rake's Progress', 'The Harlot's Progress', 'Marriage A La Mode ' , 'Industry and Idleness'  (Two copies) 'Stages of Cruelty' -  as they were called,  are represented.  There are engravings of his paintings by various hands, and  some prints which are 'after Hogarth'. There is also a First Edition of his critical thesis on art, The Analysis of Beauty , as well as an elephant version of it, (with illustrations), and there is a very fine copy of  Butler's Hudibras, with the Hogarth 'small' illustrations. We hope to build up an archive of his images with commentary and explication, so as to place his work in a cultural and historical context. In time we aim to provide a collection of 18th century images which others might use, and contribute to. Eventually, we hope to extend this site as general site for C18th studies in the visual and the cultural. This will begain by having an emphasis on graphic satire, but its subsequent direction will depend on research interests. We hope others will feel free to contribute ideas, notes, essays, research findings, germane material, images, etc. 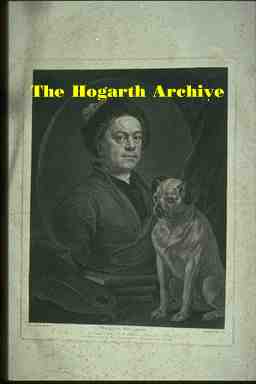 The initial set of test images can be found at:

(This is an on-going bibliography. Students over the years have helped  to compile it, adding works on various aspects of C18th life they have found useful.) Suggestions are always welcome.

The Analysis of Beauty (London, 1753) ed. Joseph Burke (Oxford, 1955). This includes the surviving manuscripts of the 'Analysis' and of the 'autobiographical notes' Hogarth wrote in the early 1760s (British Museum). (One illustrated first edition copy, and one text-only copy in the Founders' Library, Lampeter.)

Hogarth's 'Apology for Painters', ed. Michael Kitson in Walpole Society XLI. (Oxford, 1968), pp. 46-111, prints the remainder of the BM Hogarth MS., which contain more 'autobiographical notes', a great work on the situation of the artist in the eighteenth century, and notes towards continuation of Roquet's commentary on the engravings.

Nichols, John, Biographical Anecdotes of William Hogarth, containing much contemporary material on Hogarth's life, was first published in 1781, and enlarged editions of 1782 and 1785. Nichols was assisted by George Steevens, Issac Reed and others. All of this material was still further expanded in three volumes as: Nichols, John, The Genuine Works of William Hogarth, in 1808, 1810, 1817.

Walpole, Horace, Anecdotes of Painting in England, based on Vertue's Notebooks, Vol. IV, 1781

Note: Paulson identifies a 'main tradition of Hogarthian commentary' which, he argues, 'runs from Nichols and Steevens (accompanying their biographies), ending in J. B. Nichols' Anecdotes of William Hogarth ' (1833); to John Ireland's Graphic Illustrations. The above material is 'summed up, checked and corrected,and augmented in F. G. Stephens's excellent Catalogue of Prints and Drawings in the British Museum, II-IV (1873-83).

Roquet, Jean Andre, Letters de Monsieur * * A un de ses Amis A Paris pour expliquer les Etampes de Monsieur Hogarth (1746), to which was added a pamphlet on The March to Finchley, c. 1750. Paulson suggests the tradition of commentary on the paintings/engravings began with this work, sanctioned as it was by Hogarth.

Trusler, Revd. John Hogarth Moralised (1768). Trusler's explanations were still in use c.1841, when accompanied with an essay and notes by J. Major 1861.

Paulson suggests these works have been translated uncritically by Innes and Gustav Herdan as The World of Hogarth, Lichtenberg's Commentaries on Hogarth's Engravings (Boston, 1966), and the analysis of Marriage a La Mode very carefully by A. S. Wensinger and W. B. Coley as Hogarth on High Life (Middleton, 1970).

Young, J., A Descriptive Catalogue of the Works of William Hogarth, being selected and abridged from John Ireland's illustrations, and Nichols's biographical anecdotes, 1814.

Trusler, Revd. John. The Works of William Hogarth, anecdotes containing Trusler's descriptions of the plates, and of the author by J. Hogarth and J. Nichols, London, 1833.

Trusler, Revd., John, Hogarth Moralised, containing Trusler's explanations of the plates, and with an essay and notes by J. Major, London, 1841.

Nichols, J. The Works of William Hogarth, from the original plates restored by James Heath, with a biographical essay by Nichols. London, 1835-37.

Sala, George A, William Hogarth: painter, engraver and philosopher: Essays on the art, the work and the time, Ward Lock, London. 1871

Antal, Frederick, Hogarth and his place in European Art, London, 1962.

Jarrett, Derek, England in the Age of Hogarth, London, 1976.

Grimsditch, Herbert B., William Hogarth, Masters of Painting Series, with an introduction by Grimsditch, London, 1926.

Levey, Michael, Marriage A- la-Mode, with commentary and note on the painter by Michael Levey, National Gallery, 1970.

-Popular and Polite Art in the Age of Hogarth and Fielding, Notre Dame and London, 1979.

Shesgreen, Sean, Hogarth and the times of the day tradition, Ithaca & London, Cornell UP 1983.

The Image of London

Rogers, Pat, The Context of English Literature in the Eighteenth Century, 1978

Preston, John, The Created Self: The Reader's Role in Eighteenth Century Fiction, 1970.

Speck, S. A., Society and Literature in England, Dublin, Gill and Macmillan Ltd.,

Browning, R., Political and Constitutional Ideas of the Court Whigs, 1982.

Krammick, I., Bolingbroke and his Circle: The Politics of Nostalgia in the Age of Walpole, Mass., 1968.

Articles of interest appear in:

Some Principal Works Illustrated by Rowlandson:

Ackermann, R., A History of the University of Oxford, its Colleges, Halls, and Public Buildings. (London, 1814. 2 vols.)

Ackermann, R., A History of the University of Cambridge, its Colleges, Halls, and Public Buildings. (London, 1815. 2 vols.)

Combe, W. and Rowlandson, T., The Tour of Doctor Syntax in Search of the Picturesque. (London, 1812)

Combe, W. and Rowlandson, T., The Second Tour of Doctor Syntax, in Search of Consolation. (London, 1820)

Baskett, J. and Snelgrove, D., The Drawings of Thomas Rowlandson in the Paul Mellon Collection (London, 1977)

Oppe, A. P., Thomas Rowlandson: His Drawings and Watercolours (London, 1923)

Samuels, A., 'Rudolph Ackermann and The English Dance of Death', (The Book Collector XXIII, 1974)

ROWLANDSON AND  THE ARTISTIC TRADITIONS

E-Mail us if you have any ideas or suggestions at this stage, we would be delighted to hear from you.

We hope to feature other graphic satirists:


Curator of the Archive:   Allen Samuels.


With thanks to Ewan Sutherland